Thanks to the eBau team for presenting a lightning talk and running a stand at DINAcon 2022.

Thanks also to Giger Energy and Solargenossenschaft Region Biel for the process inputs on the design of the eBau portal during a HACKnights meetup.

While the eBau and Caluna projects currently are not fundraising online, we can support the Django REST framework which the project depends on the backend, as well as the frontend framework Ember.js which is on Open Collective.

Log into the eBau portal of your canton and try to create a draft submission. Get a feeling for the platform and think about whether it helps you to complete a complex application process with the authorities.

Read through the documentation of the project, learn about the software architecture and political process behind it. Contact the team with any suggestions or improvement requests through GitHub or e-mail.

Deploy the project locally, or get started as a developer by installing the Caluma project on your machine. See if there are any open issues you could contribute to, help with a translation, etc., on the open source repository.

This content is a preview from an external site.

This repository contains the source code for the web applications used to handle electronic building permits and comparable processes in the Swiss cantons of Berne, Schwyz and Uri.

The following image shows a high-level overview of the architecture: 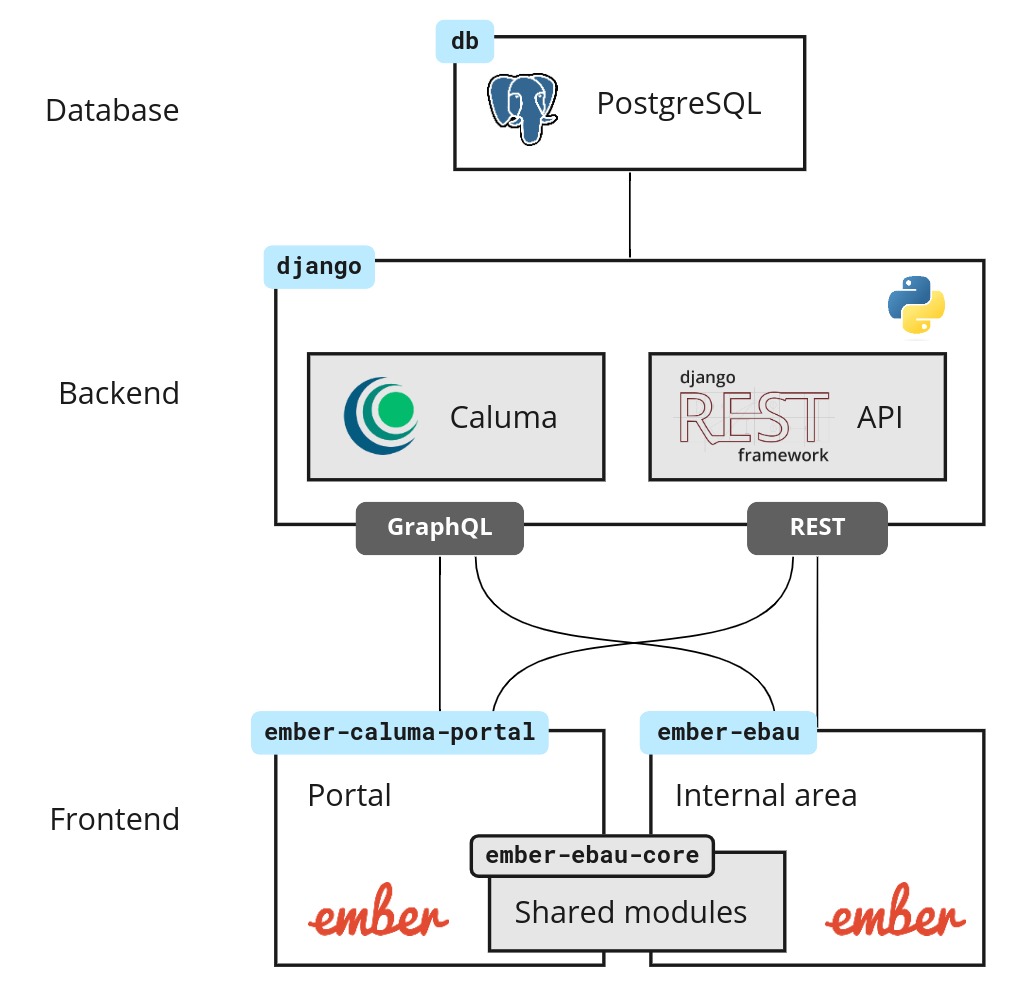 Due to ongoing modernization work, some Frontend modules are not yet integrated in ember-ebau, but instead are still part of ember-camac-ng. Few Frontend modules are not part of this repository yet at all. The following table lists the most important modules in the "internal" part of the application and their respective completeness / integration state (in the demo configuration).

The preferred development environment is based on Docker.

Docker can be used to get eBau up and running quickly. The following script guides you through the setup process. We recommend using the demo config for now, since it features the highest number of modules in the ember-ebau app.

In case you want to manually modify /etc/hosts following domains need to point to 127.0.0.1 (localhost):

For automatic checks during commit (formatting, linting) you can setup a git hook with the following commands:

After, you should be able to use to the following services:

The following administrator accounts are present in Keycloak or the DB, respectively:

For debugging inside container shell, use this:

Note however that those two apps ember-caluma-portal and ember-camac-ng share the same node modules tree through a yarn workspace.

The common yarn workspace allows us to share code (e.g. addons) between the apps which are part of this repo (instead of following the typical approach of publishing releases on npm). This also means that

To enable django-silk for profiling, simply add DJANGO_ENABLE_SILK=True to your django/.env file. Then restart the django container and browse to http://ebau.local/api/silk/.

The remote debugger settings for VS Code are committed to the repository.

To enable debugging in the django container the ptvsd server must be started. Since this debug server collides with other setups (PyCharm, PyDev) it will only be started if the env var ENABLE_PTVSD_DEBUGGER is set to True in django/.env.

The GWR module is developed in two separate repositories:

If you use the GWR module, you need to generate a Fernet key according to the documentation of the gwr backend.

You need to set this key in each environment/server in your env file. Generate a separate key for each environment, since this is used to store / read the gwr user passwords.

The API should be designed in a way, that allows it to be used by any eBau project. For needed customization, the following rules apply:

For different feature flags and permissions, see APPLICATIONS in settings.py.

In development mode, the application is configured to send all email to a Mailhog instance, so unless you specify something else, no email will be sent out from the development environment.

You can access the Mailhog via http://ebau.local/mailhog . Any email sent out will be instantly visible there.

This project is licensed under the EUPL-1.2-or-later. See LICENSE for details.

Added funding links for REST & Ember, and wondered: is there a pip fund tool in the works, or something else similar to npm fund

Had a brief look at Elektroform, an industry-specific solution related to eBau that may be struggling with similar data consolidation issues.

We tested eBau BE, talked to an expert user, and proposed some UX improvements on GitHub.

loleg
👋 Contact 🌐 Open 📂 Download 💻 Source
All attendees, sponsors, partners, volunteers and staff at our hackathon are required to agree with the Hack Code of Conduct. Organisers will enforce this code throughout the event. We expect cooperation from all participants to ensure a safe environment for everybody.

The contents of this website, unless otherwise stated, are licensed under a Creative Commons Attribution 4.0 International License.